What’s In a Name? – by John Johnston

What’s in a name?  John Johnston shares his experience and the importance of naming RCMSAR vessels to acknowledge contributions of outstanding members and keep their memories alive.

At last years SAREX in Sooke, I had the opportunity to work as a dock marshal. Over the two days that I was there I became very curious about the names of some of the vessels. That curiosity took me back to my time at Station 7 (Steveston) now Station 10 (Richmond) when an early Titan vessel was named the “Jimmy Ng.” 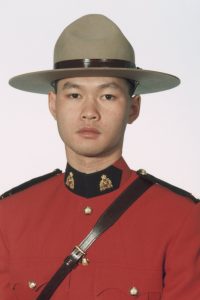 Jimmy, age 31, was a Richmond police officer who was killed in the line of duty on September 15, 2002. He had been a Mountie since 1996 and had been transferred to Richmond 16 months prior. Although his tenure with Station 7 was not long, his dedication to the community and the station was well recognized by all, to such a degree, that the station and society unanimously supported naming their new vessel after him.

A year later I relocated to Victoria and joined Station 35 (Victoria).  When I arrived a long-standing member of the station named Rick Tolonen took me under his wing and orientated me to the station, equipment and vessel. It was not an assignment – it was a kindness that held me in good stead while I transitioned. I learned later that it was not uncommon for Rick to act as a resource for members.

Rick was and had been regular Coast Guard for many years and brought to the table a breadth of experience, knowledge and skill that he was always willing to share with the members. What is not widely known is that Rick was one of the pioneers that advanced the concept of a volunteer marine search and rescue program. In his role with Coast Guard he was responsible for all the inflatables and in that role, he was able to supply a few start-up stations with loaner vessels.

After he retired, he dedicated a lot of his time instructing the Pleasure Craft Inspection program to members and station business.

Following his passing, the Victoria Marine Rescue Society (VMRS) and the Station decided to name the new enclosed, jet drive the “Tolonen”. This naming was to recognize Rick’s dedication and commitment to the station and his efforts as a pioneer that were instrumental in the creation of a  volunteer marine search and rescue organization.

What’s in a name?  My experience is that it may capture the history of a member that made a significant personnel contribution to a station and or the community. The naming is way not only to acknowledge the personal contribution of the member but to keep that members memory alive.

It would be a shame to lose that history. To that end:

*RCMSAR invites stations to provide a short description of to whom a station vessel, past or present vessel has been dedicated. That description will be published in future editions of the Compass.*